2014 started on a very somber note for the Boulder trail running community, our friend and fellow runner Marcy Servita had just been diagnosed with late stage pancreatic cancer….a diagnosis which is never good. The community rallied around her, those closest to her gave everything they could; time, energy, food, love….but on March 16th, 2014 we lost Marcy. It was a tremendous loss for the community, and obviously hit those closest to her very hard, including my friend and fellow ultra runner Greg Salvesen. Greg and Marcy had been ultra running friends (and training partners) through the Boulder Banditos running group (where we’d also met). To honor what Marcy loved (running) and as a way to cope with the loss, Greg decided to run a 100mile+ race every month in 2014…..so the story begins. 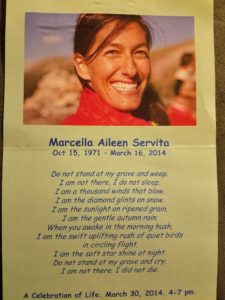 On March 16th, 2014 we lost Marcy Servitas to her battle with Pancreatic cancer.

As 2014 rolled on Greg was ticking off 100mile races as if they were 5k’s; HURT, Rocky Racoon, Antelope Island, Zion, Peak 200, Bighorn, Vermont, Fatdog…… After a hiccup with the cancellation of Mogollon Monster due to weather, Greg decided to still finish up the year’s races….though there was one issue, there were no 100mile race in December? Thanks to good friends Ryan Smith and Nick Pedatella a 100mile route was drawn up to circumnavigate Boulder, and a crew was recruited to support the run. In December 2014, supported by a crew of his friends, and joined by Ryan, Nick and a few others, they completed what became the first Boulder Badass 100 run. Since that time the Boulder Badass has become an annual event, focused on community, comradery and just doing crazy things. Fast-forward to 2018, in June I received a group message welcoming me to the 2018 version of the Boulder Badass as one of 8 participants….oh damn, I’d have only four weeks after the Grindstone 100 to recover and run yet another 100mile event. 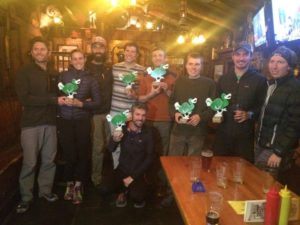 The original Boulder Badass crew in 2014. A bunch of Dodos.

After a summer full of adventure culminating in a sub-24hour run at the Grindstone 100 (see previous post), I had four weeks to get my legs to a place where I could yet again run 100miles, by far the quickest turnaround I’d ever attempted. At 10pm on Friday Nov 2nd to the melodic reverberations of the Fart Blaster, seven of us pranced out my front door into the rainy night with only one goal…to survive the 100mile circumnavigation of Boulder before work on Monday morning. We ran head first into the cold driving rain, mud from the trails sticking to our shoes and rain threatening to soak through our jackets. Thankfully by the time we reached Dowdy Draw the rain tapered off and the stars began to break through the clouds. We fought our way around the South Boulder trails, 30-40mph winds intermittently whipping across the grasslands, just the seven of us joking around in the dark night.

A crew of dedicated friends had volunteered to crew us through the cold dark night, and were always an energetic and welcoming site for the seven of us. As we jogged our way through Walker Ranch daylight finally percolated through the cloud layer and we were able to switch off our headlamps. By the time we reached the Walker Ranch TH we were 38miles and 10hours into the Boulder Badass, but had a long way to go. The crew was ready and waiting at Walker Ranch, and we were happy to see them. We refueled, joked around then packed up and dragged our first set of pacers off onto the Meyers Gulch trail with us. We dropped down into a snow storm on Magnolia road, where Hurculean Paul ran into a dead tree at full speed knocking the 20ft tall trunk in Colleen’s direction with a huge crash, narrowly missing her. We all had a good laugh at Colleen’s near death experience, and spirits stayed high as we pounded down Magnolia road to the next crew point. 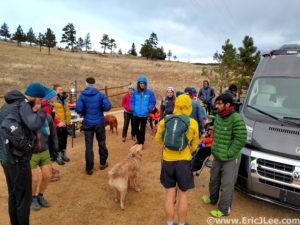 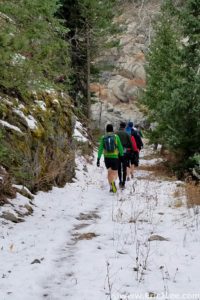 The gang cruising along the aquaduct toward Magnolia rd.

We arrived to quite an entourage at the base of Magnolia road, there was lots of stoke and despite having 43miles on our legs we were all moving pretty well. Next up was a little jaunt through Betasso with a whole new crew of friends hitching along for the ride. We jogged, laughed, screwed around a fair bit but kept a slow and steady pace forward. The continual stream of fresh faces joining us for Sanitas, the Hogback, Boulder Valley Ranch and finally the long haul along the bike paths back into town kept us distracted. Each time we rolled into an aid station the crowd seemed to grow, the noise decibel increased and a handful of fresh meat would join us for some miles. 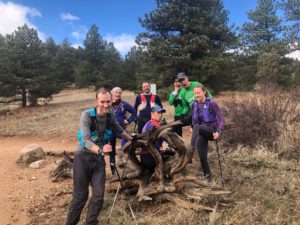 The whole gang still together in Betasso. Photo by Flannery Davis. 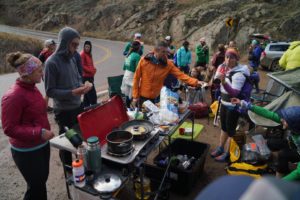 Road side madness in Sunshine Canyon. Photo by Brendan Davis.

70miles and 20hours in we reached the Cottonwood trailhead on the East side of Boulder. I picked up Adam who was to join me for the rest of the fun filled night ahead. We had broken up into runner/pacer teams now, though none of us were far apart and I spent the boring bike trail miles leap frogging with Colleen, Paul and Doug. We all had a good laugh at the ridiculousness of our situations, the pain we were willingly enduring and as always at Doug’s endless stream of entertaining word vomit. When I rolled into Eben G Fine just after 8pm there was a serious party going on, it was a bit overwhelming for my tired brain, but I did feed off the energy a bit. 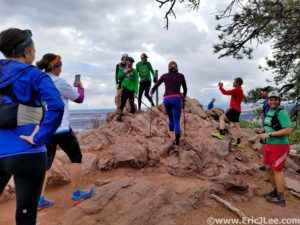 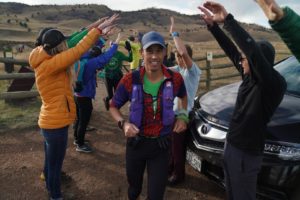 Arriving at the Foothills TH to quite a welcome. 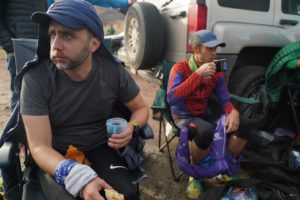 All business, or were we…..Photo by Brendan Davis

After Eben G Fine the fun began, a proper skyline traverse, with a full descent between most of the peaks to maximize elevation gain. Chapman Dr was a slog, and the mindset of most of the runners was slowly deteriorating into ultra-mush. After a little bit of confusion that had all of us taking different lines down off Flagstaff Mountain, we hit the last aid station at the Gregory TH, staggered 5-10min apart. This was our last refuel point before the long haul up and over Green, Bear and SoBo, so each of us took an extra few minutes to get our shit together. As I stood up to leave Ryan informed me that in proper Badass tradition we’d be running down Baseline Rd to Chautauqua then BACK to Amphitheater (which was currently 200ft away). In a moment of childish frustration I picked up a handful of cheese and threw it at Ryan before jogging off down the road with Adam. 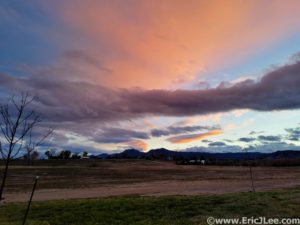 Sunset from the Res, damn those peaks are far away.

I hit the climb up Amphitheater with reinvigorated legs, but just after the ladder that energy soon faded and the death march was on. Doug soon caught back up to us, greeted us with a ‘Hello Assholes’ and we commiserated our way to the summit of Green, two more summits to go. Doug and his entourage of three took off just ahead of us down Green. Fern turned out to be the slog we were all dreading. Colleen caught up to Adam and I about half way up as I drunk stumbled my way up the steep stairs, half awake, but half in a glazed over stupor. We rolled over Bear Peak and to the summit of South Boulder Peak, bypassing the crew at the saddle until the return trip. Once back at the SoBo saddle we all had only one thing on our mind, getting this shit done. I chugged a little redbull,thanked the badass volunteers who had trekked all the way up there at midnight and began the painful rock hop down shadow canyon. 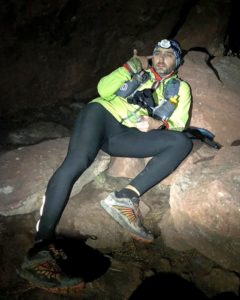 My feet ached with every step, the tendons in my ankles were stiff, my knees sore and my mind foggy, but with only 5miles to go it was time to get this shit done. I limped my way slowly down shadow, finally exiting the canyon only to see Jeff and Colleen’s lights coming back from the wrong direction? I made a joke to them and Colleen’s only response was something to the effect of “we went the wrong @$%* way…” and she ran off, woman was on a mission. The final few miles went by slowly, as my drive to push had faded and I was happy to power hike my way to the finish and just enjoy the cool night air. Adam and I arrived back at my house 31h54min36sec after departing on Friday night. It had been a long couple days, lots of highs and lows, lots of banter, lots of non-sense shared, and laughs had. In the end six of the seven starters had completed the entire 100mile+ course. It also turned out that the Badass was my 10th 100mile event finish, my ‘1000mile buckle’ in a sense. 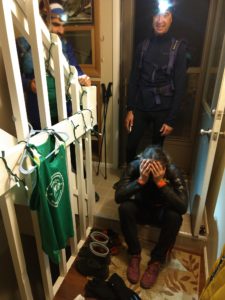 Gwen overwhelmed with emotion after becoming the first finisher of the 2018 Boulder Badass. Photo Ryan Smith.

As we all lay crumpled on the floor of my living room, the only thought that came to our minds was how happy we were to be done. We were sore, exhausted, a bit delirious, but all really happy with our efforts over the past several days.  The Badass had never been about beating anyone or breaking a time goal, it had been about the shared experience, the comradery and the community. While the seven of us may have been the centers of attention, the event was about bringing the local ultra community together. To support and be supported, to show that running is just running, but what makes these crazy long events so special is the community surrounding it and the friendships they foster. The Badass was created as a way to commemorate someone who left a whole in our community’s heart, but in its place was born an event that, even after five years, still emanates the love and good vibes that makes Ultrarunning so unique and amazing. This is why, even after 12years of running these things, I’m still not ready to throw in the towel, because of the support and the community that is ultrarunning. 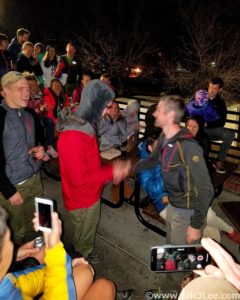 The 2019 Boulder Badass planning has already begun. Eli is the first new participant welcomed to run. 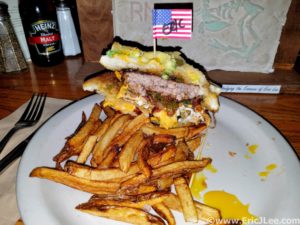 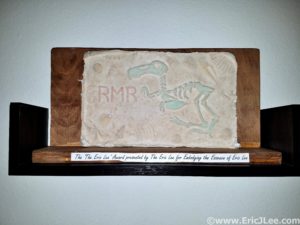 Special thanks to all of the Rocky Mountain Runners for keeping such an awesome tradition alive and supporting us through this huge undertaking. To my fellow runners; Gwen, Colleen, Paul, Dan, Doug and Guy for sharing so many miles and all the laughs along the way. To the Godfather Greg Salvesen and the Mastermind Ryan Smith for inspiring this event (yes it’s your faults). To my pacers Nick, Josh, Derek, Mike, Aiden, Ginna and Adam…it really does take a village to raise an Idiot, and we’re especially big idiots. Lastly thanks to Vfuel for keeping me energized through this brutally exhausting two month stretch and my massage therapist Myriam Desrosiers for keeping my legs functional after all the beating they’ve taken.

View all posts by Eric Lee →