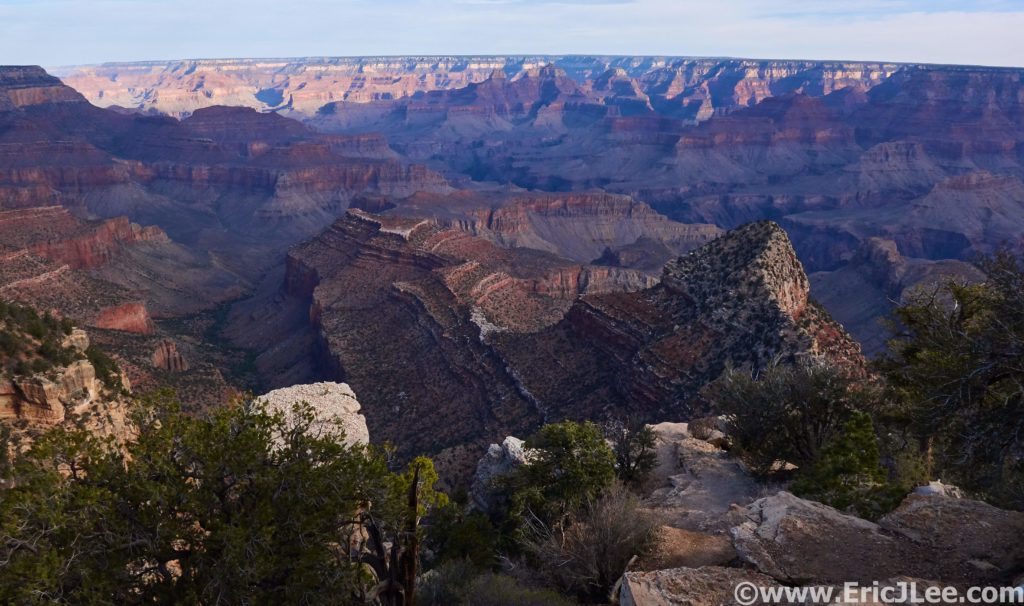 We ran where yesterday? I’m pretty sure that question was asked several times as we stood on the South Rim at Grandview Point admiring the morning shadows dancing through the Grand Canyon. The previous day 9 of us had set out to complete the famous Rim-to-Rim-to-Rim  (R2R2R) run across the Grand Canyon (and back), and thankfully everyone succeeded, though some were a little less spry than others.

When the original invite went out to organize a group to head to the Grand Canyon my initial thought was, I’d already done it twice, why do it again in lieu of something different? But as the months drew nearer, the group logistics began to fall into place, and I realized how distant those memories of my last Grand Canyon trip were (8 years ago) and how much I missed the desert and needed a little time wandering the red rocks, so I was 100% in. As the date drew closer I was surprised to learn that I was the only one of the group of 11 that had ever done the R2R2R, and one of only a few who had even been to the canyon, what a treat it was going to be sharing this experience with so many that had never experienced the wonder of dropping 5000ft into the depths of one of the most surreal natural landscapes.

So Jake, Doug and I packed up our shit in my little Subaru, squeezed in Jefferson as a last minute addition and hit the road around 630p on Thursday headed for a late night camp out at Rabbit Valley (the CO/UT border). On Friday most of the folks who had never seen the canyon wanted to get down there a little earlier to take in the views, but I was able to convince Doug and Jefferson to join me on a little side adventure into Hogwarts canyon in the North Wash region. We grabbed our harnesses and belay devices, I stuffed some extra biners, webbing and cord in my backpack and Jefferson shouldered my 200ft rope and we set off from Hwy95 for the 2.5mi round-trip canyoneering adventure. The route finding was pretty straight forward and we soon found ourselves at the top of the first rappel, leading into the narrowing canyon below. We spent the next hour and change rappelling, scrambling, taking lots of photos and just enjoying the silence of the slot canyon. We soon popped out back at the road only 1/2mi from the car and continued our drive to the Grand Canyon (2:15 quick canyoneering adventure). 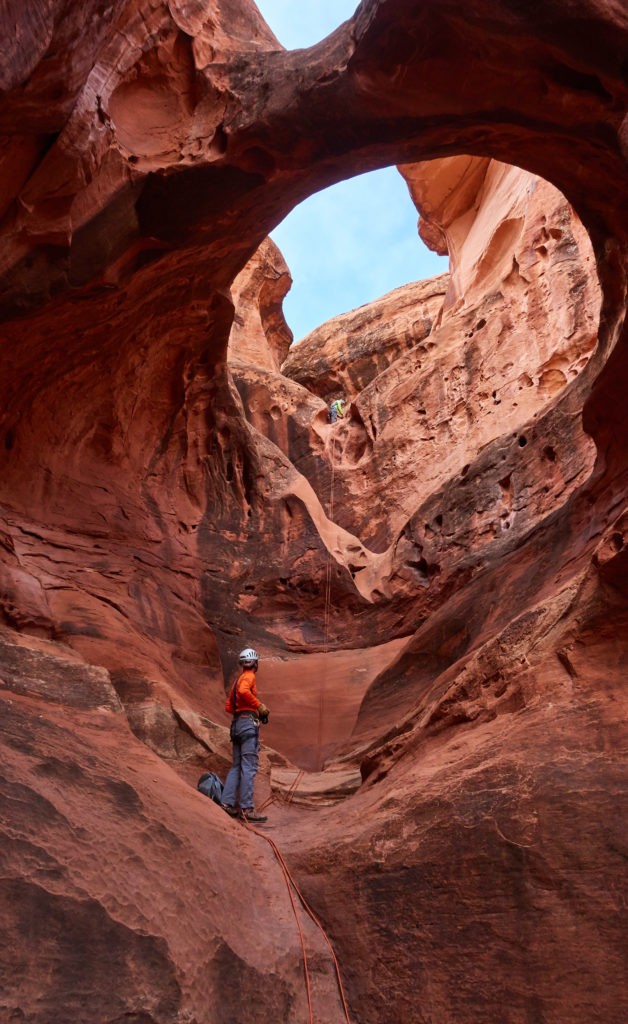 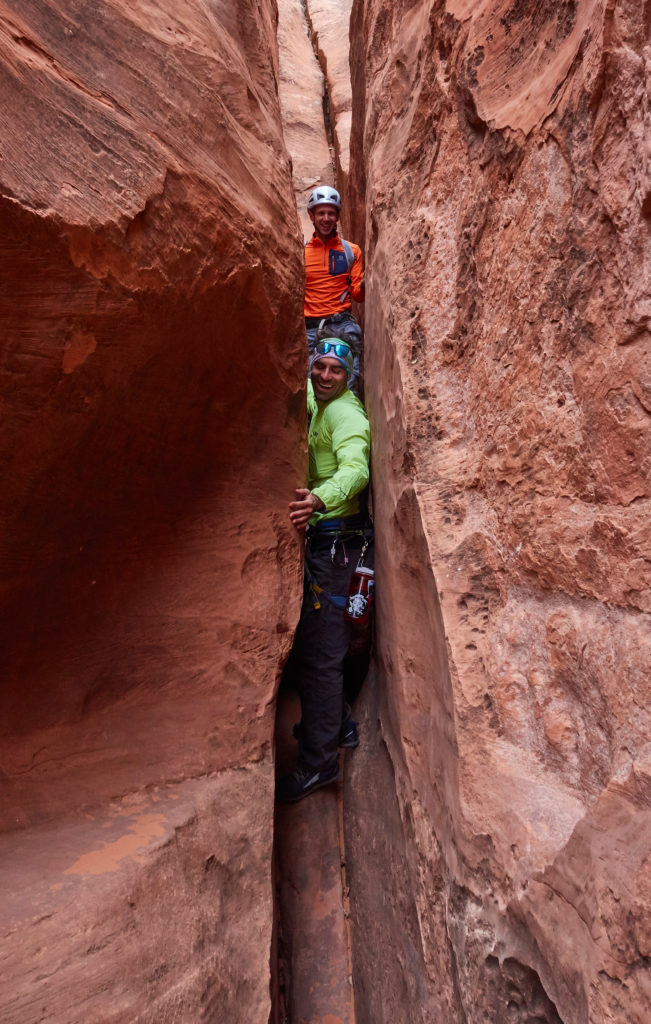 Squeezing and scrambling the narrows of Hogwarts makes one feel like a kid again.

After passing through the Grand Canyon East entrance we approached the edge of the South Rim, our first views into the canyon, and got a treat of exactly how F-ing huge the Big Ditch truly is, “we’re running where”? After some last minute packing and planning, we shoveled down dinner and tried to hit the hay earlier for our 4am wake-up call. The alarms went off between 330-4a and we all slowly stirred ourselves awake in the chilly morning air. We shoved all the necessary gear into our running packs, wrapped ourselves in down coats and drove over to the trailhead. Since one can’t park at the actual trailhead for the South Kaibab trail, we parked in some pullouts along the main park road, begrudgingly threw our warm jackets into the cars and jogged down the road to the South Kaibab trail under a moonless but glitteringly starry sky.

The whole gang at the start ready to drop into the canyon a 4:45am.

In the pre-dawn light our group of 9 followed a train of headlamps down into the canyon, negotiating switchback after switchback. As we neared Cedar Ridge civil twilight began to slowly illuminate the massive buttes and towers of the canyon, and for the first time on the trip we started to get a sense of how ‘grand’ the canyon really is. We were only a fraction of the way down the steep South Kaibab trail, and there was a lot more trail ahead of us. The purple, pink and red hues of the morning light on the rocks had us all gaping almost as much as running, we stopped to take photos every few minutes, and why not, the views were stunning. The excitement level was on 10 and we all felt so fortunate to be physically capable of undertaking such a crazy wonderful experience. Despite this being my third R2R2R I felt like a kid in a candy store, while the views were vaguely familiar, the sheer joy, wonder and excitement of running down into the canyon was no less than the first time I visited.

Morning light illuminating the canyon walls as we drop down the South Kaibab. 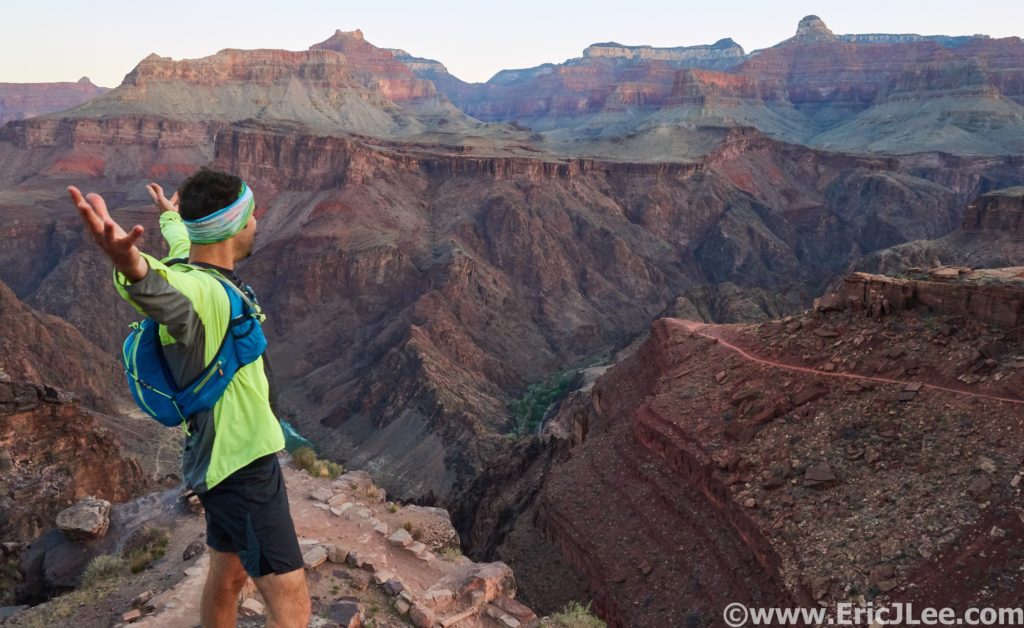 Jefferson perfectly encapsulates how we were all feeling that morning. 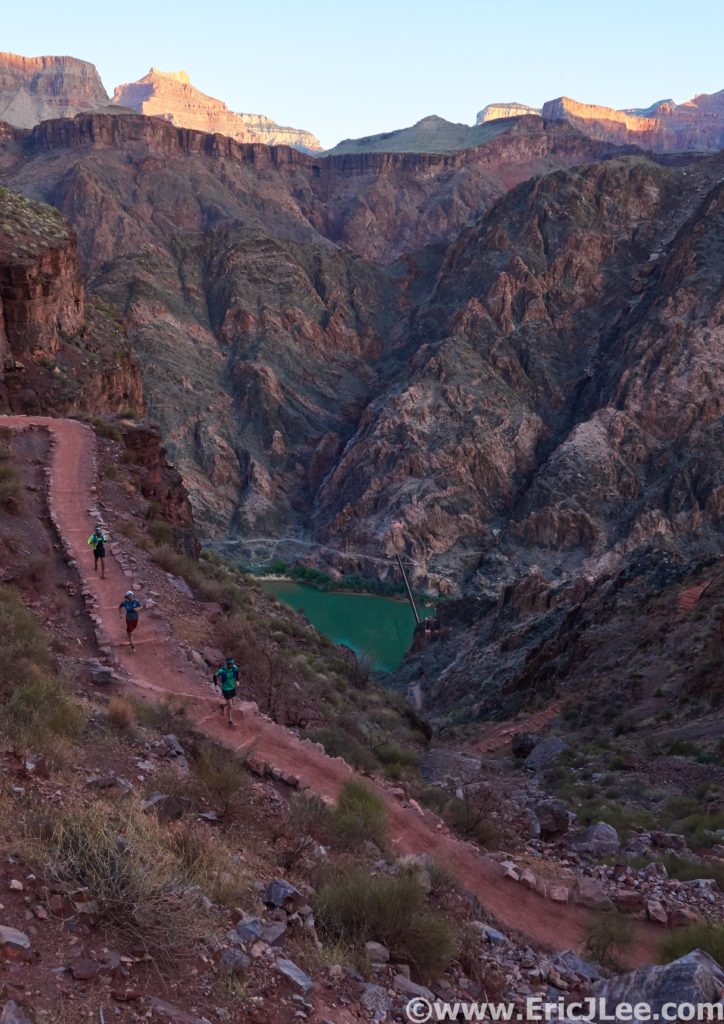 Descending to the Colorado River and the Black Bridge.

We jogged our way across the Black Bridge over the Colorado and into Phantom Ranch for our first refill and official break of the day. After Phantom we entered The Box canyon, one of my favorite portions of the run. The red and black rock walls rose hundreds of feet vertically above our heads, as the tranquil Bright Angel creek slowly gurgled along side. Occasionally a slot canyon would pop in from the side, but for the most part we were trapped by the narrow walls. This isolating feeling is one of the things I really love about the desert canyons, you have two choices, forward or backward, surrounded by the impenetrable but beautifully colored rocks. As we ran up The Box the group started to separate a little, but we regularly regrouped to share the join and wonder and take numerous photos, and soon found ourselves at the ranger cabin (AKA Manzanita). After a water refill and a snack off up to the North Rim we went. 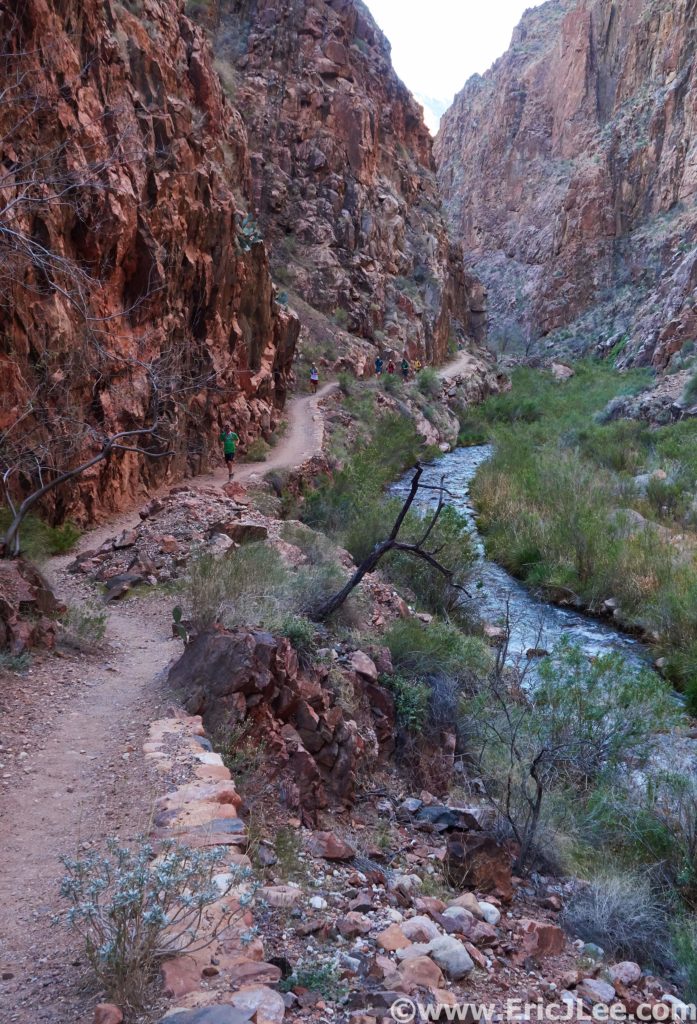 Shelf trail in The Box alongside Bridal Veil creek.

I was feeling a bit spunky so decided to get the legs moving a bit and pushed on ahead up the never-ending switchbacks to the Supai tunnel where I laid down in the shade for a short nap. Ben, Jefferson, Adam and I regrouped at the Supai tunnel before striking out on the final steep push to the North rim where we arrived in just over 6.5hours. It was cool and shady at the trailhead where we relaxed for a bit waiting for the others to catch-up. We all regrouped on the North Rim around 7hours after leaving the cars, half way done with our journey, now we just had to get home….. 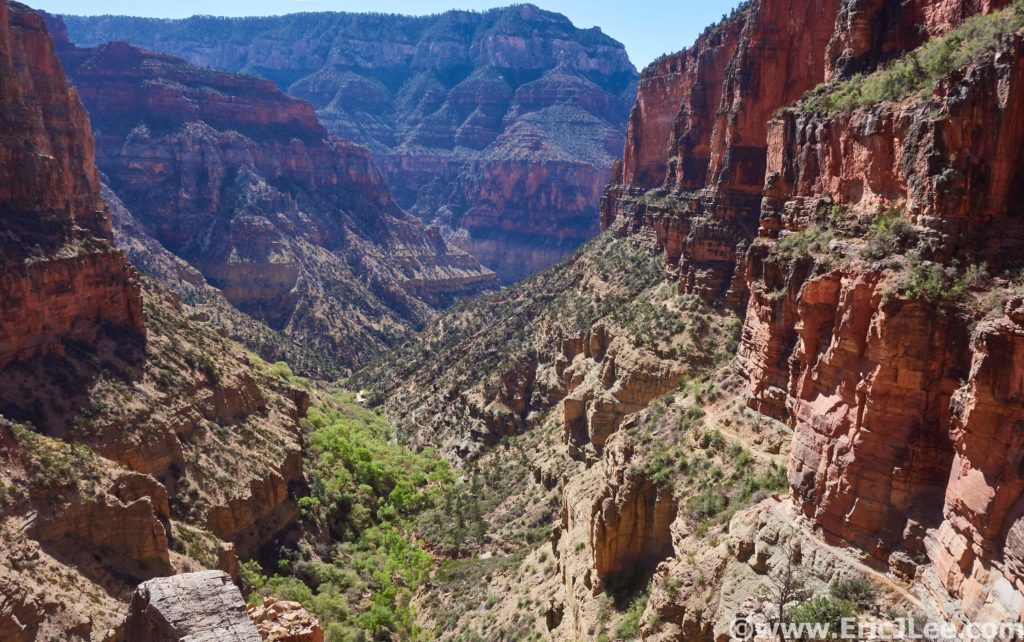 Climbing up toward the North Rim, note the trail on the right. 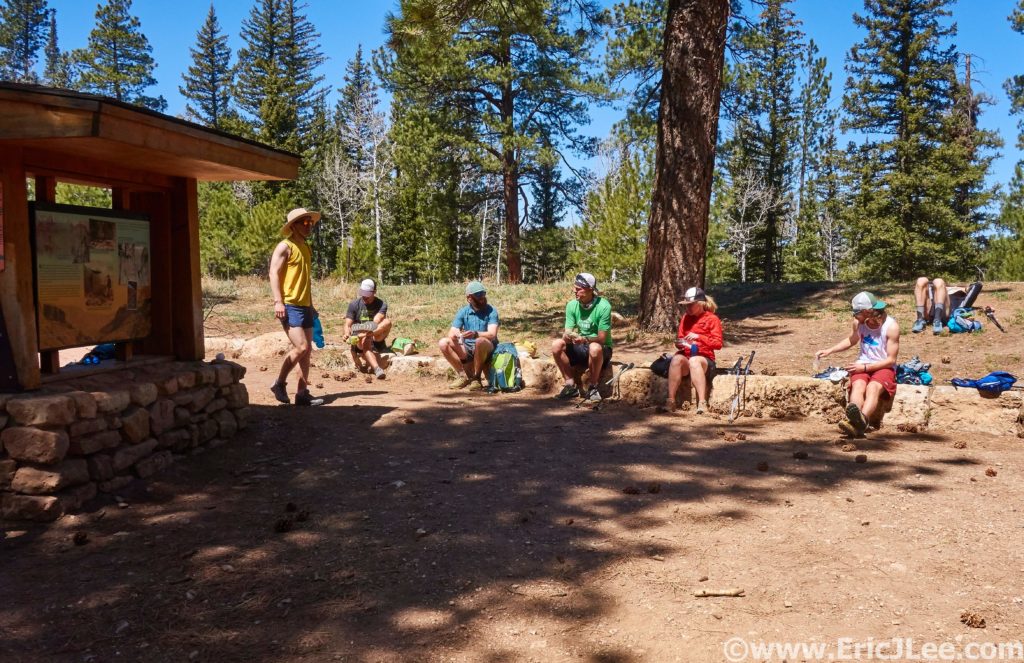 Hanging out at the North Rim trailhead in the cool air.

With a long 21mile grind ahead of us I opted to forge ahead on the technical but runnable downhill from the North Rim. I whipped around switchback after switchback back down into the depths of the canyon, across the shelf trail and before I knew it I was back at the ranger cabin. After a quick water refill and dousing (it was getting warm) it was off on the long dry stretch back to Phantom Ranch. I was well ahead of the rest of the group at this point so figured I was running it solo back to the car. I took my time down Bright Angel creek, just cruising the rolling terrain and focusing on hydrating and keeping cool. I passed a few other runners and hikers, but it was actually a surprisingly quiet day on the trail. I finally arrived back at Phantom Ranch, a bit toasty from the constant sun exposure, but overall in good spirits. Good thing too, because I knew what lay ahead, 4500ft of relentless climbing in the hot sun back to the South Rim, oh joy. 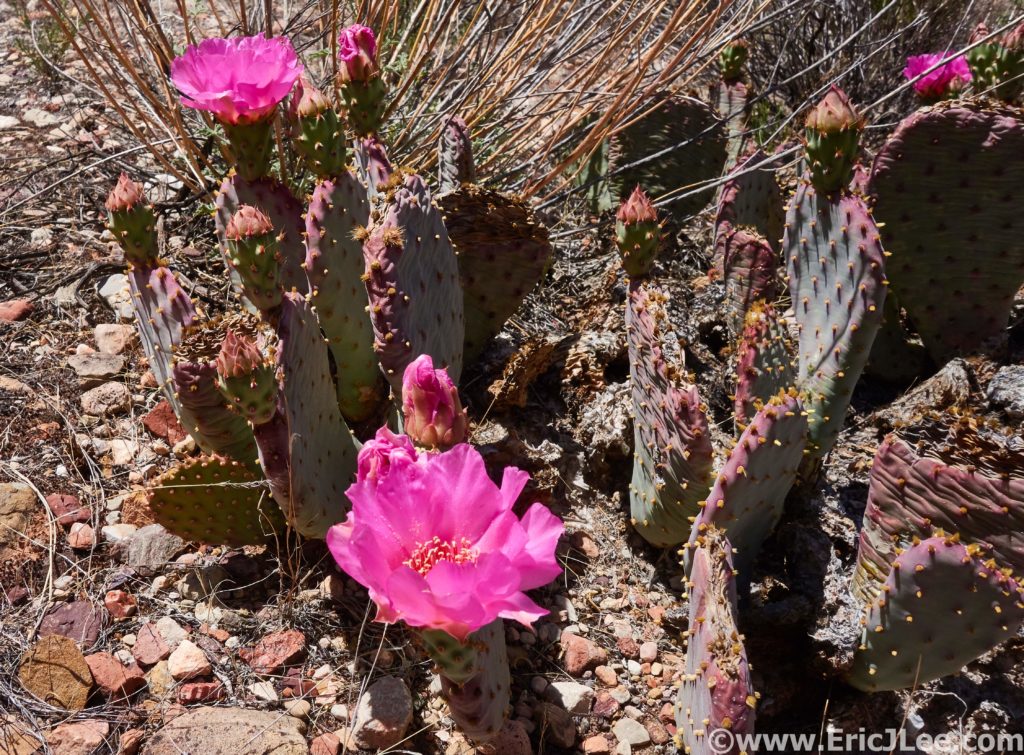 Cacti blooming along the trail near Cottonwood Creek CG.

Back at the Black Bridge and trying to mentally prepare for the long climb ahead.

I felt pretty good and was optimistic at making it back to the South rim before the 12h mark, but the canyon quickly told me otherwise. About half a dozen switchbacks up I could feel the lethargy and fatigue building, just too much time in the sun and a bit dehydrated. I started setting small goal, moving from shady spot to shady spot (under rock outcroppings), in order to take a short reprieve from the sun before moving onward. The time dragged by, each switchback seemed to take longer and longer, but upward I went. Finally I hit Cedar Ridge, the temperature cooled and I trudged on, just a little faster, making the South Rim at around 12h15min after starting out. Not my fastest time across the canyon, but a solid day in a stunning place. After returning to the car to rehydrate and fuel, I lugged some extra food and water back to the trailhead (3/4mi) to await the arrival of the rest of the crew. Jefferson wasn’t too far behind, then came Ben and Adam, and just after dark the rest of the crew trudged their way back up to the rim. The South Kaibab trail had thoroughly beaten us all down, but it hadn’t dampened our spirits at what an amazing day it had been. The canyon had shown us just a small fraction of her vast beauty, and had also reminded us that none of us are stronger than nature, and that we are merely guests in this amazing temple. 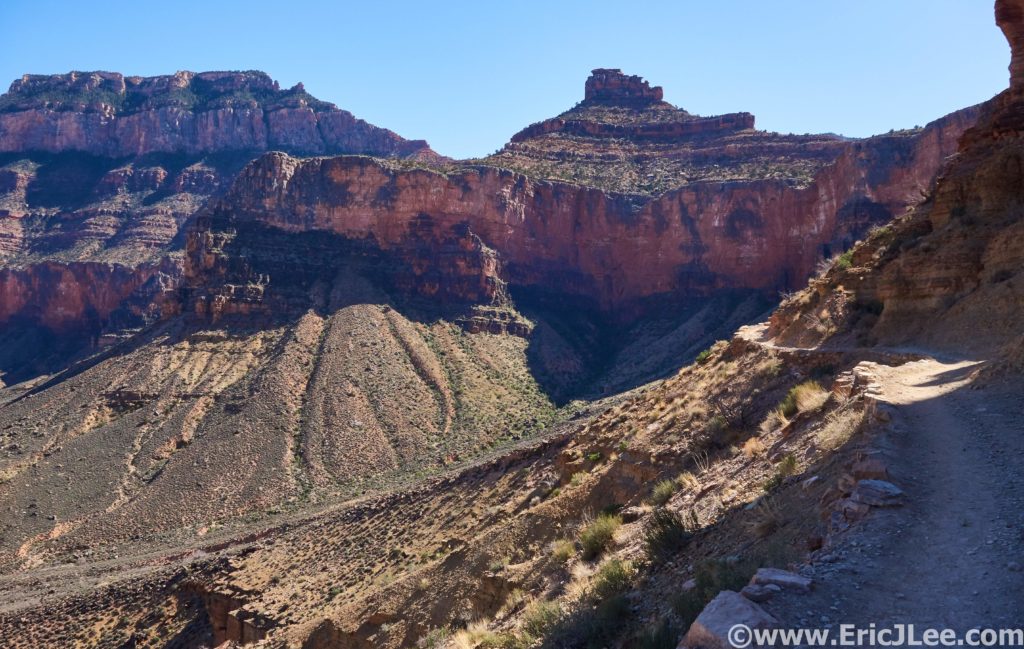 The moment that you look up and realize its a really long F-ing way to the top.

Cumulative effect of 9hours in the sun, feeling a bit cooked.

While I ran the second crossing solo, being able to share the canyon with good friends definitely made for a wonderful experience. Stopping at every view point to pose for photos, marveling at the massive walls and letting our senses immerse themselves in one of the most magical landscapes in the world. A place we are fortunate enough to have protected for us to enjoy in the crazy manner that we deem appropriate (running 42miles/11k ft). The Grand Canyon R2R2R is not something to be taken lightly, but it should definitely be on every ultrarunners bucket list. Special thanks to Vfuel for keeping me powered, to Lauren and Brad for proposing such a wonderful idea and letting us share in the Birthday celebration (for both Lauren and Adam), and all the rest of the Rocky Mountain Runners for the company along the journey. Just remember to respect the canyon, leave it better than you found it, and help protect it for future generations to come. 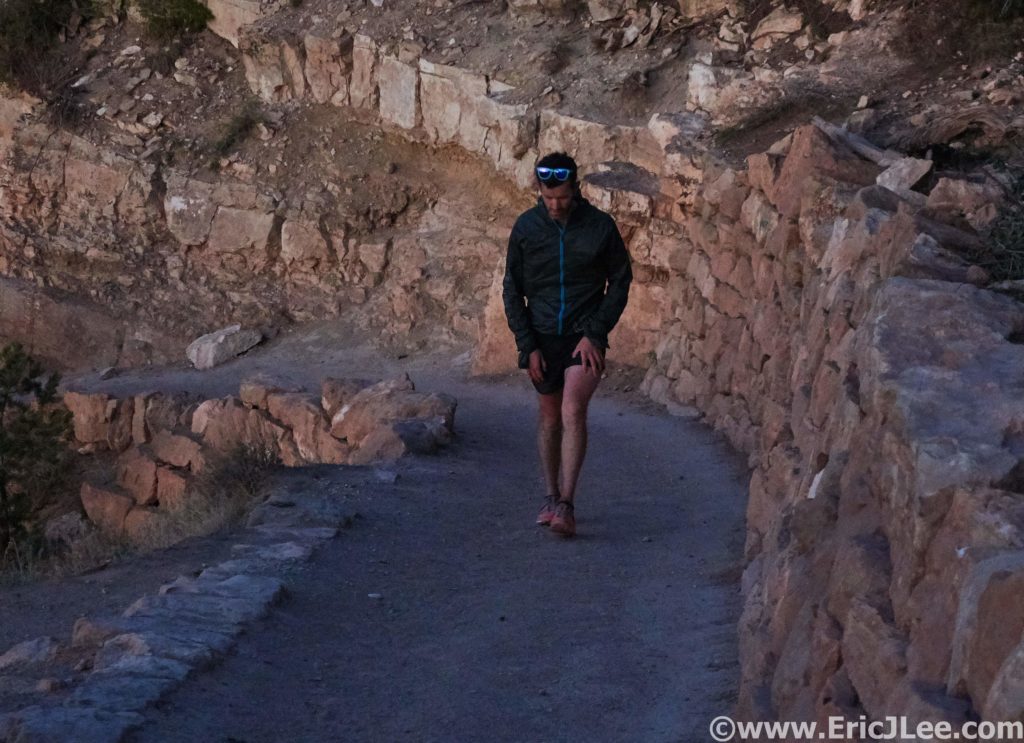 Adam fully feeling the effects of spending 14hours in the canyon.

“In the Grand Canyon, Arizona has a natural wonder which is in kind absolutely unparalleled throughout the rest of the world. I want to ask you to keep this great wonder of nature as it now is. I hope you will not have a building of any kind, not a summer cottage, a hotel or anything else, to mar the wonderful grandeur, the sublimity, the great loneliness and beauty of the canyon. Leave it as it is. You cannot improve on it. The ages have been at work on it, and man can only mar it.” – Teddy Roosevelt 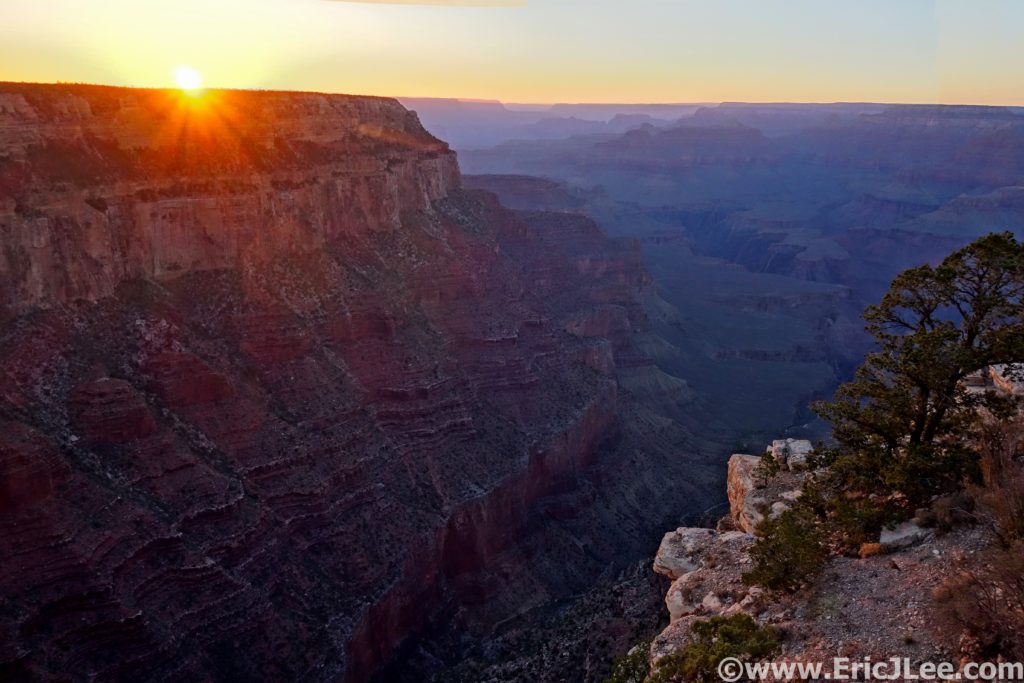 Sunset from the South Kaibab TH over the Grand Canyon.

View all posts by Eric Lee →

Tales from a Turtle
2018 Boulder Badass 100; Running, Community and Remembering